The fact that I'm showing adult chibis for Fingolfin and Finarfin here doesn't mean that they grew to adulthood instantaneously with no intervening period of childhood. :)

As a design note: Fingolfin has his father's hair, but wears the blue and white clothing associated with the Vanyar. Finarfin has his mother's hair, and wears the green and white associated with the Noldor. Both chibis therefore show their mixed heritage as children of Finwë and Indis. Fëanor has black hair and wears green because he's a pure-blooded member of the Noldorin race (not that I'm, you know, implying that he's a fascist or anything.)

I described Elvish naming customs back in #116: but as a reminder - most Elves in this era have two names: a father-name given by the father and a mother-name given by the mother. Father-names tend to follow a common pattern within a family - Finwë's three sons have the father-names Curufinwë, Nolofinwë and Arafinwë - while mother-names are more unique and personalised. Many Noldor also later acquired a translation of their name into Sindarin - which is where 'Fingolfin' and 'Finarfin' come in. Using these names already in these cartoons is, strictly speaking, anachronistic; but it's the name they're usually known by, and the name used in the Silmarillion, so I'm also using their Sindarin names from the start.

(Also, from a Doylist point of view: Tolkien gave the name 'Fingolfin' to Finwë's second son in the 1930s, used that name in most of his stories and essays, and only decided that his original Quenya name was Nolofinwë Arakáno in the 1950s. Same for most of the other characters.)

Next time: Part 131: Wicked stepmother
Chibis by tektek.org
Original story by and copyright to J R R Tolkien, ed. C Tolkien: Primarily based on the Silmarillion, but incorporating ideas from the 12-volume History of Middle Earth series.
Questions and comments welcome! 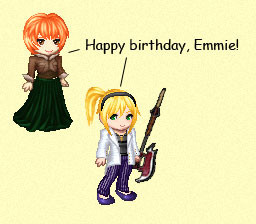 (Who are those two people again? Oh yes, I remember. :))
Collapse